In Friday Night Funkin vs Herobrine Reborn mod, our hero Boyfriend will meet with a Minecraft character who has come to participate in a musical battle. He came to FNF with swords in his hands and brandished them while standing on the music stage throughout the competition.

Friday Night Funkin vs Herobrine Reborn mod consists of one stage, in which the Boyfriend and the character from Minecraft will fight in the music ring for the title of the best singer. The boyfriend also armed himself and took with him a sword and shield, which can save him in case of an enemy attack. Throughout the game, the BF will stand with its back to us and carefully look at its competitor. Herobrine has already visited FNF, and then he failed to defeat our main character. He really hopes that this time his cunning plan will come true, but we will do our best to prevent this from happening. 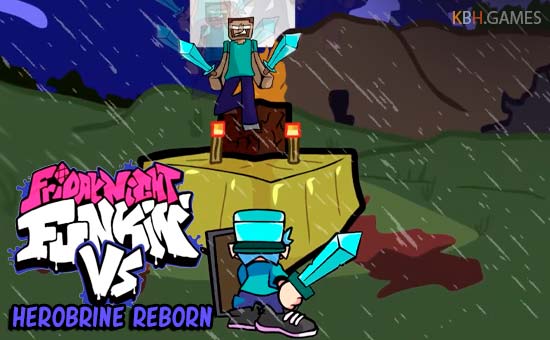