A version of Friday Night Funkin where the opponent was Flippy who became Flipped Out and Boyfriend had to compete against him in a rap battle to crazy music. This character is very dangerous and angry, because he has a knife in his hands and he does not behave at all adequately. With such eccentrics, you need to be very careful not to harm yourself and your Girlfriend.

In Friday Night Funkin (FNF) vs Flippy Flipped Out 2.0 game you will not sing alone, because your girlfriend will help you. Holding hands, you will stand far from your opponent and sing while standing on large music speakers. At this time, Flippy is singing a song with a crazy look, brandishing his big knife. Do not be afraid, because this is just a game and nothing threatens you. But in order to prove that there are no more best singers on this stage, you need to defeat the opponent. Therefore, press the desired keys on the keyboard at a certain moment to catch all the moving arrows. 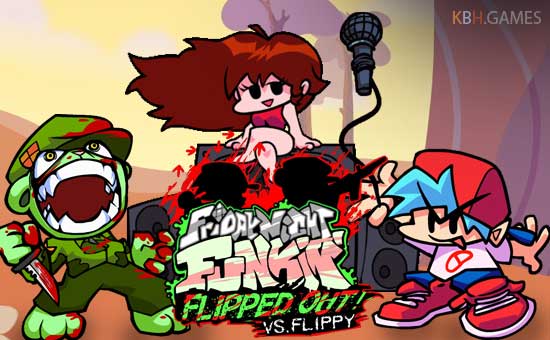