Today, the guy is waiting for another musical battle, during which he will try to win the respect of his girlfriend's father. This time his rival will be the cool rap artist Bob. In Friday Night Funkin' (FNF) vs Bob Week game you will find a new musical direction, in which you are not strong and experienced enough. Can you help the guy defeat the enemy? 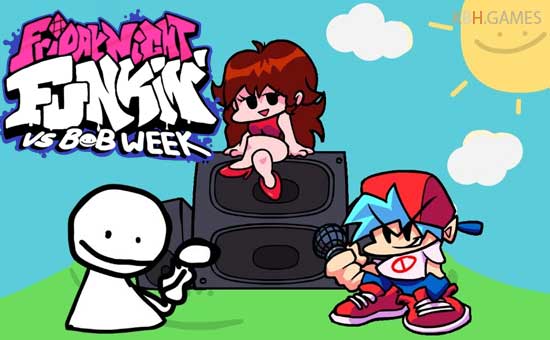 Remember that in musical battles that will take place within the framework of the game, the main thing is far from perfect pitch and excellent data. To defeat your opponents, which will also include the tough rapper Bob, you will have to demonstrate incredibly high reaction speed, repeating all the combinations of notes that they will pronounce during their performances after their opponents. In this case, use the arrow keys. The game has two modes, from which you can choose the most suitable one. The first free play mode will allow you to independently determine the opponent with whom the guy will fight in a fierce musical battle. If you choose the story mode, then together with the character you will consistently participate in all musical battles prepared in the game.