This guy in the cap will make your fingers run across the keys at a crazy pace. Accelerant Hank is a famous antagonist, with whom the main character of the storyline, Boyfriend, will have to fight in a musical battle. One enemy and four new tracks - such a test for fans of the genre was prepared by the developers of this game application.

In Friday Night Funkin' (FNF) vs Accelerant Hank game, one boy fell in love with his girlfriend, but her parents are not thrilled with such courtship of their daughter. They do not look like strict and conservative people, in the past these people were rock musicians. A guy can only convince them of the seriousness of his intentions with the help of music. It is a link for all parties to the conflict.

The peculiarity of the game is that it was posted on the open source network. Anyone can make their own mods by adding another interesting character to it. If you know how to remake PC games, create a new challenge for gamers. Otherwise, you'll have to settle for completing Friday Night Funkin and many other add-ons. 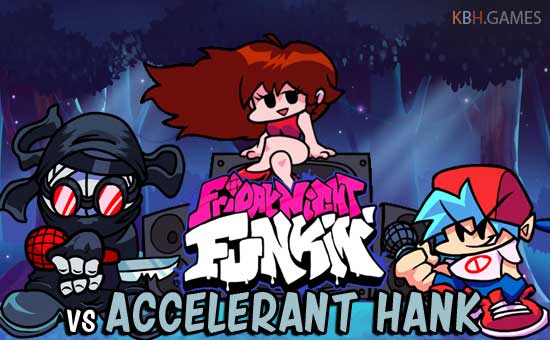