In this Friday Night Funkin (FNF), the girls Sky and Ski quarreled and on this occasion they decided to arrange a musical duel between themselves, in which it will be decided who is right and who is wrong. At the beginning of the game, they talk calmly, but Ski gradually begins to imitate Sky, who becomes enraged. After that, the conversation begins on raised tones. Of course, if you correctly assess this situation, then the first girl is wrong, as she provoked a conflict.

Later in the game, a Girlfriend appears and the little girl starts to address her very politely, which makes things even worse as the older girl gets jealous. In Friday Night Funkin Sky vs Ski mod, you will hear a couple of interesting songs that girls will surely like. Here Boyfriend, unfortunately, will not appear as a singer, he will only be mentioned several times in the dialogues of our heroines. In general, the mod is very interesting and colorful, so many fans of Friday Night Funkin will definitely like it. We wish good mood and peace between these girls. 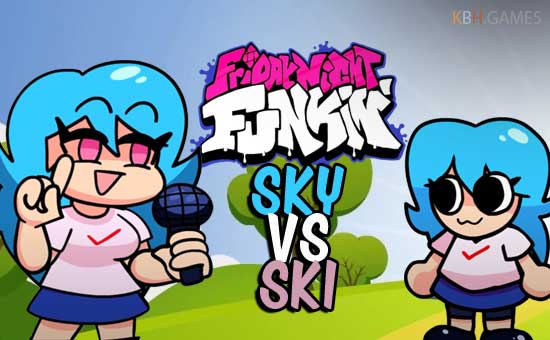