In this Friday Night Funkin Chainsaw Man vs Sword mod, the action will take place in a subway car, where the guy will fight one on one with a scary monster. He was going to his girlfriend on a date, but out of nowhere a demon appeared, with whom he had to enter into a musical duel. Our hero is not a simple guy, as he knows how to transform into a superhero.

Friday Night Funkin Chainsaw Man vs Sword mod will be very active, where two super-dangerous characters will rap to dynamic music. The guy knows how to transform into an unusual hero who has sharp chainsaws instead of a head and hands. He skillfully knows how to use them in battle and not every opponent risks entering the ring with him. In ordinary life, this guy looks like a calm, handsome student who loves his girlfriend very much. He wears a white shirt with a black tie, pants, and brown shoes on his feet. In FNF Chainsaw Man vs Sword mod, you have the honor to control this unusual superhero. Catch the arrows with the appropriate buttons or use WASD. If you win, then your hero will go on a date with his beloved. 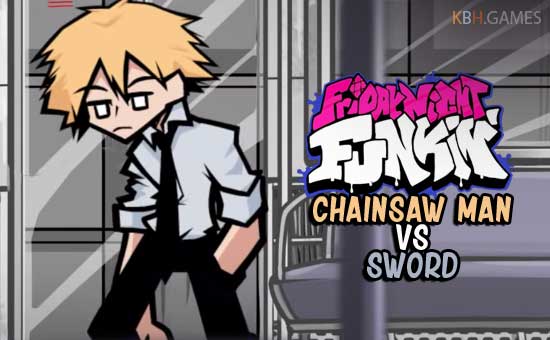