In this new FNF vs Indie Cross V1 mod, you will find yourself in the same music scene as Cuphead, Sans and Bendy who teamed up to defeat Boyfriend. These guys are very skilled and experienced musicians that it will be difficult to compete with, especially when they are all together. It would be nice if these rivals appeared one at a time in each individual Friday Night Funkin mod, but they are not as stupid as they seem.

FNF vs Indie Cross V1 game is filled with the latest music hits that are known all over the world, so it will be fun. In addition, BF is ready to take on any challenge in the musical battle, as he is confident enough in his abilities. Cuphead is a glass-headed singer, which means he is a very fragile character in FNF vs Indie Cross V1 mod. The same can't be said for Sans, as he's a hardened guy with amazing stories that often feature skeletons and other scary characters. He skillfully holds a microphone in his hands and knows a lot about rap. Bendy is a rival whose head looks like a dark crescent, which means that in FNF mods, his mission is to bring danger. Boyfriend is not the first day at the helm of this musical madness, so we are sure that he will succeed. 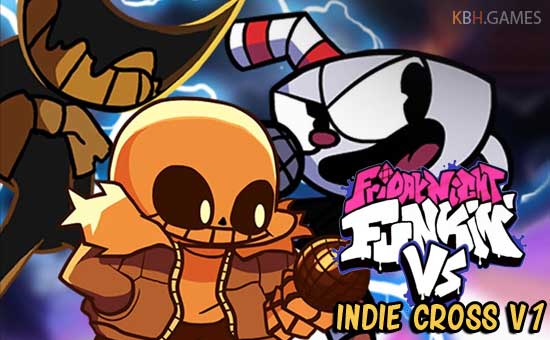