In the new Friday Night Funkin (FNF) mod, you will meet Happy Tree Funkers, where Flippy will compete with other characters from this cool animated series. You probably know these characters for a long time, but not everyone knows how cool they can sing rap songs. There will be a colorful atmosphere where small animals will perform like real musicians.

New hits have been added to FNF vs Happy Tree Funkers (Flippy) game, which should appeal to many players. Maybe you think this game is for kids? This is not at all the case, because you will find a difficult duel between the characters who will fight until victory in order to prove to everyone how cool they can sing. You won't see Boyfriend and Girlfriend here as this mod was made entirely by Happy Tree Friends fans. You will need to control Flippy the bear, who is dressed in a military uniform but no pants. This character becomes dangerous when he loses his temper. He begins to remember the wartime, when he had a chance to fight in the Navy, and becomes aggressive. Therefore, this bear, when it starts to get nervous, turns from a cute animal into a real dangerous and bloodthirsty killer. 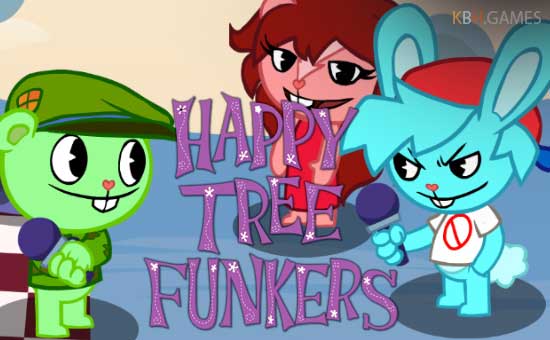