Would you like to play with Freddy Bear in Squid Games in the new FNF mod to find out which of you is the best rap artist on this music platform? This part of Friday Night Funkin was created especially for fans of such fun. You just need to be patient and brave to win this weird mod.

Many players won't like the idea of ​​bear singing, but there's nothing you can do about the rules of the game. You need to look at the flying arrows and press certain keys. The picture that you see on your monitor will not be very pleasant, because the bear will be lying on the floor in a very serious condition.

Dive into FNF vs Freddy Squid Games mod and give this character a chance at first place, because if he loses, he will most likely die. His health is in danger, but he still sings songs to become the best singer in this game. You will not leave him harmless alone and help him fulfill his dream, no matter how difficult it is for you to do it. 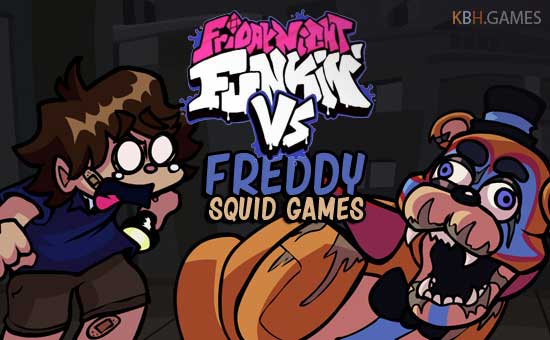