Your task in this Corrupted version of Friday Night Funkin (FNF) is to help Boyfriend fight Robin in the musical battle to make the Girlfriend love this song. Learning to sing great on stage is not an easy task, it takes a lot of effort and a lot of precious time. It is clear that it will be extremely difficult to do this, but you will definitely succeed. The problem is that the girl has a very strict father, and he, by the way, is a former musician, therefore he is well versed in musical compositions.

In this FNF vs Corrupted Robin mod, you'll have to fight a musical battle against Robin, who doesn't really want to see a guy and a girl together. This rival is tall, dressed in black clothes, and very angry. It all started with the fact that you were on a basketball court, when suddenly the most unpleasant guy came up to you and offered to compete. Before starting the musical battle, you can choose the mode in which you will play, and after that you can still choose the song. 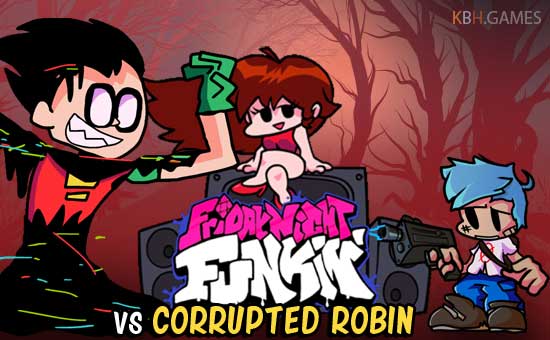